Highway 1 reopens after rockslide, but Coq still closed due to fire – Kamloops News

A large fire burning on the Coquihalla Highway on Sunday

The Coquihalla Highway remains closed this morning due to a wildfire between Merritt and Hope.

DriveBC tweeted around midnight that it should have an update on the situation by 8am this morning. 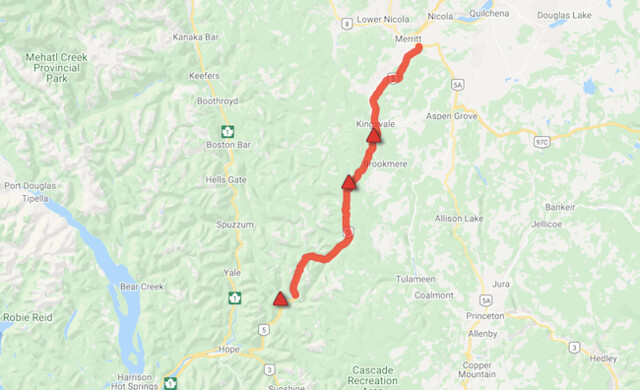 The Trans-Canada Highway reopened after a landslide Sunday near Lytton, but the Coquihalla remains closed between Merritt and Hope due to a fire burning along the highway.

DriveBC said in a tweet shortly after 11 p.m. that Highway 1 was reopened to travellers.

DriveBC’s website was down earlier on Sunday evening, but the agency said it had ironed out technical difficulties and things were running smoothly again.

Two of the main roads connecting the interior to the Lower Mainland are closed on Sunday – one due to a wildfire, the other due to a rockslide.

DriveBC said in a tweet just before 9 p.m. Highway 1 closed in Lytton due to a minor rockslide.

The Coquihalla has been closed between Merritt and Hope for hours due to the July Mountain Fire, which is burning on both sides of the highway.

Drivers are told to use Highway 3 as an alternate route.

DriveBC website crashed on Sunday evening, probably due to the large number of visitors seeking information on motorway closures.

This story will be updated as new information becomes known.

The Coquihalla Highway is closed due to a wildfire burning nearby.

DriveBC posted the notice on Twitter Sunday evening, saying the freeway was closed in both directions between Hope and Merritt.

At least two fires are burning near the road, the July Mountain Fire, which started a month ago, and the Brook Creek Fire, which was started late Saturday by a burning barbecue that set a pickup truck on fire.

It is not known when the highway will reopen.

A rockslide closes Highway 99 south of Lillooet on Monday